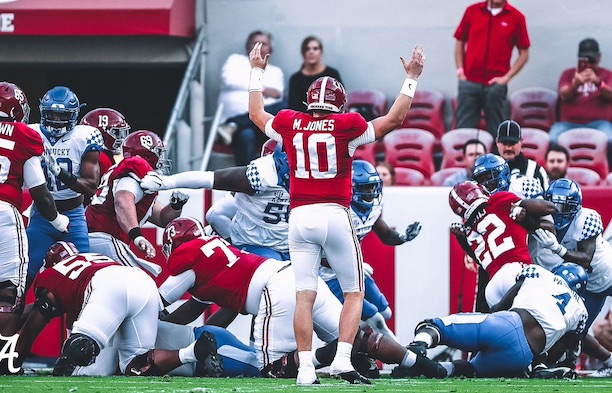 Heisman Trophy candidate Mac Jones signals at TD for the Tide. Photo: Alabama Athletics By Kevin Wilkerson, PubClubc.com College Football Blogger The MVPs of this college football season are not quarterbacks Mac Jones, Justin Fields, Trevor Lawrence or any of the players, but the schedule makers in the various conferences. Collectively, they should be awarded the Heisman. That is because they are jugging games like magicians and are keeping the sports going when so many games are being postponed or canceled due to COVID-19 protocols. Without them, the season would have likely been downed like a punt inside the 10 yard-line. On Thanksgiving Weekend alone, USC-Colorado was canceled with the Buffalos playing San Diego State instead of the Trojans, the Apple Cup was canceled with Utah replacing Washington State on Washington’s schedule, Tennessee-Vanderbilt was postponed with the Commodores getting Missouri as a replacement and Alabama’s game with Arkansas on