Who Invented Popcorn? A History Of America's Favorite Movie Snack 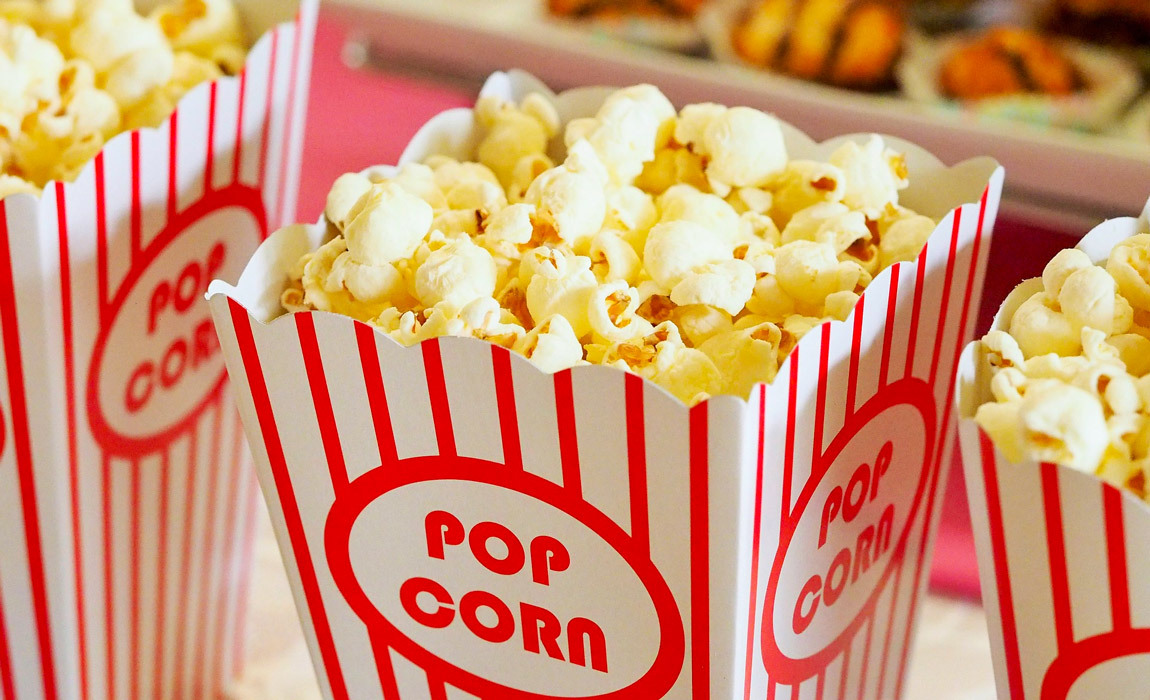 It has never been possible to give one person's name or group of people that could be credited for inventing this delicious and most-popular snack that is enjoyed at sports events, carnivals, fairs, rodeos, movie theaters, parties, in gift baskets, at home any time, while watching television, in packed lunches, while playing games, when on the computer, and whenever and wherever the craving hits. It also makes wonderful holiday popcorn balls for Halloween and garland decorations to drape the Christmas tree or the fireplace mantle.

Definition of Popcorn: Popcorn is made from a variety of maize that produces small kernels with a hard outer shell. They puff up and burst when exposed to dry heat at 100°C (212°F). The heating builds pressure in the kernel, and a small explosion or "pop" results in crunchy billows of white deliciousness with an irresistible smell.

Most of the snacks that Americans enjoy such as hot dogs, jerky, beer, etc. are actually imports from other cultures who's traditions were adapted by Americans. Popcorn though, has been a popular snack for thousands of years with a heritage that has been traced back to the indigenous people who lived here well before the arrival of the European settlers.

Since then, the popularity as spread across the globe and is expected to reach more than $6.4 billion dollars by the end of 2027. You could say that business is truly popping!

So, How Long Has Popcorn Been Around?

The main reason for not knowing the inventor is that popcorn goes back centuries! While we have records of modern anthropologists and industrialists who have shaped what we now consider popcorn ... there are no official records on who the first person to pop corn was.

However, through decades of research, we've been able to piece together a lot of the details and discover some amazing facts about the origins of popcorn, including facts like these:

* The oldest ears of popping corn were discovered in central New Mexico bat cave in 1948 by two Harvard graduate students, botanist Earle Smith and anthropologist Herbert Dick. The small heads of corn and kernels that were individually popped have been carbon-dated to be around 5,600 years old!

* A kernel found in a cave in Utah thought to be inhabited by Pueblo Indians is approximately 1,000 years old! French explorers found popcorn made by the Iroquois Indians in the Great Lakes region.

* In Central and South America, particularly Guatemala, Peru, and Mexico, there is evidence that the Aztec Indians not only ate popcorn as food, but they also decorated regular and ceremonial clothing, statues of gods, necklaces, and headdresses. Archeologists have discovered traces of popcorn in Peruvian tombs that were 1,000 years old.

* Americans fell in love with movies in the 1920s, and by 1929 an average 100 million Americans went to the movies weekly. At that time, street vendors would sell popcorn outside the theaters using steam or gas-powered poppers. The theaters wanted to make those profits, so they began to sell their own popcorn, and the tradition of eating popcorn when watching movies continues to this day.

Before the popcorn machine was created, popcorn was made at home on the stove or in the fireplace. The first large steam-powered commercial popcorn-popping machine was invented in Chicago by Charles Cretors in 1885. It was mobile so that it could roam the streets and had a gasoline burner. He took it to the Chicago Columbian Exposition in 1893, and it was an instant hit. In 1900, Cretors introduced a horse-drawn popcorn wagon.

Cretors was the owner of a candy store who used a commercial peanut roaster to sell freshly roasted nuts. Unhappy with the machine's quality, he began tinkering, and, in a few years, he designed new steam-powered machines for both nut roasting and popcorn popping.

The Raytheon Corporation invented the Microwave Oven in 1945, and an employee, Dr. Percy Spencer, invented the microwave version of popcorn in 1946. The introduction of commercially available microwave popcorn was introduced in 1981, which caused the consumption of popcorn at home to skyrocket.

During the late 1890s, Louis Ruckheim came up with Cracker Jack, which he made from popcorn, molasses, and peanuts. The snack probably got its name from a popular slang term at that time meaning excellent or first rate.

A popular gift at holiday time is large decorated cans of popcorn that has three kinds in it: butter, cheese, and caramel. Some of the gourmet varieties include white chocolate, chocolate fudge, peppermint, cheddar cheese, cinnamon, honey, a sprinkle of smoked paprika, even chocolate!

Americans eat more of the fluffy white stuff than anywhere else in the world. The oldest snack food in the world even became a patriotic and favorite snack during WWII (1939–1945) when Americans ate three times as much popcorn as they did before the war. The Popcorn Board reports that now Americans eat about 13 billion quarts of popped corn each year or 42 quarts per person! Since 1958, there has been an annual “National Popcorn Day" in America that is celebrated at the end of January.

What's The Future Of Popcorn?

Popcorn continues to be one of the most popular snack food segments in the United States and so it shouldn't be shocking that innovation and product development continues.

For instance, during the pandemic when movie theaters were closed, some chains such as AMC theaters were selling popcorn in to-go packages for customers to enjoy at home. Many of their theaters even offered delivery services and sold it at mall kiosks as well. This has continued in some spots even as movie theaters are open again. Unfortunately they haven't figured out how to offer the experience of the butter dispenser.

Popcorn by itself isn't unhealthy and this is especially true in comparison to other items such as chips. It is more a matter of what you put on top of it that makes this relatively healthy snack something you should avoid.

As a result, innovation continues on new flavors such as curry, cinnamon, even a dusting of coca powder. While these are mostly things you can do at home to top your popcorn, companies are working to offer similar options that will be available on grocery store shelves.

While 40% of the continued growth in popcorn sales is coming from North America - 60% comes from the rest of the world, especially Europe and Asia where popcorn isn't already a staple the way it is here in the US. This is leading to further innovation in flavors, packaging, and even ways to produce the delicious popped corn in ways that are unique to those cultures.

While we don't know who popped the first corn, we can certainly say that the subject of who invented popcorn is one that is shared by innovators around the world and that this treat continues to grow in popularity.