Who Invented Fried Chicken From Entire World To America And Back 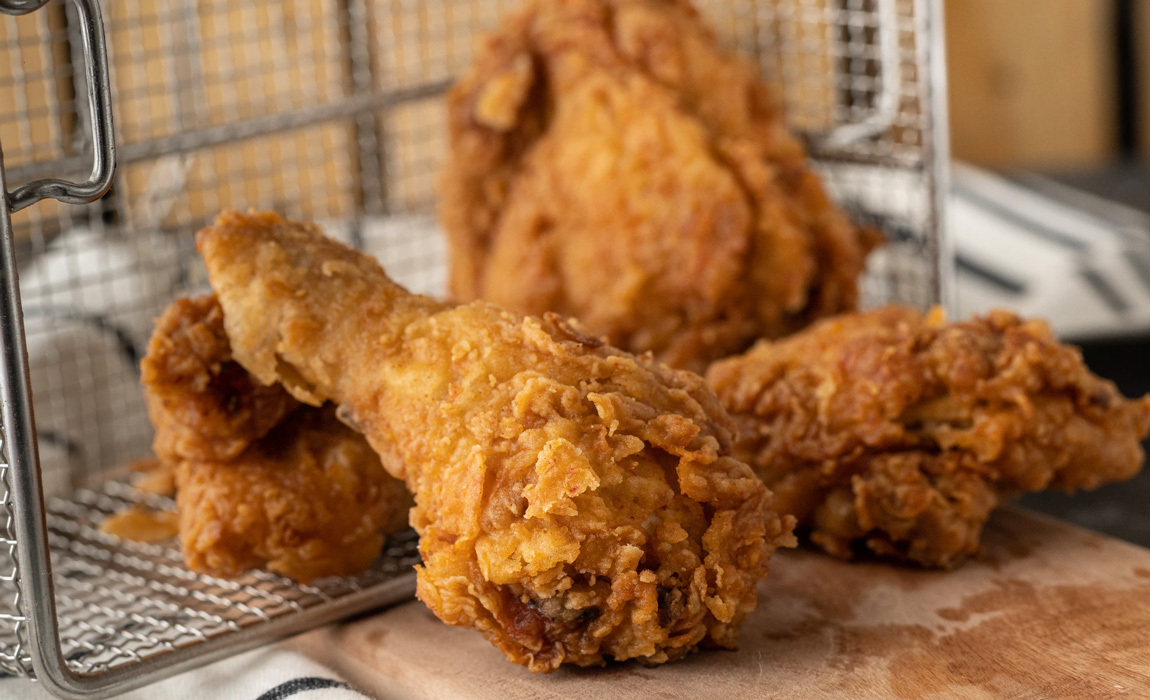 Fried chicken is probably one of the most popular dishes across different cultures dating back thousands of years because chickens are one of the easiest animals to raise.

Chickens are easy to raise because they are omnivores who eat almost anything, they can be raised indoors or outdoors on a farm and get sick less often than other livestock. Chicken is known for being the most consumed meat in the world, with some estimates saying that an average person eats up to 80 pounds of chicken per year - which doesn't include fried eggs.

As such, shouldn't be surprised that an enterprising chef would on purpose or accidentally discover that dipping the chicken in batter and frying it would create an delicious, energy packed meal that was relatively low cost.

For most Americans, fried chicken is among the foods that people associate with the American South. However, although most people claim this meal has its origin in America, numerous theories claim the origin of fried chicken traces back to Scottish, African, or even Asian culinary heritage.

As mentioned earlier, Fried Chicken is a meal that consists of battered or floured broiler chicken pieces that undergo deep frying or pressure frying. This breading equips the exterior of the chicken pieces with a perfect crust or crisp coating that enhances its taste and appearance. What makes this meal different from the rest is that the cook cuts chicken pieces from the joints during the cooking process, leaving the skin and bones intact.

is a lot like deep-frying, but instead of submerging the meat in hot oil, you cover it with a shallow layer.

The meat is submerged in hot oil, which cooks the exterior to a crisp and golden brown while leaving the inside moist because it remains untouched by the heat source. The only downside of this process is that some people who are health conscious would want to avoid deep frying as much as possible because of its higher fat content than other cooking methods.

Pressure frying is cooking food that's been coated or dipped in wet batter using high pressure and temperature to cook at very short times, usually just minutes. This is often referred to as Broasting Chicken because it is both deep fried and pressure cooked at the same time. The result is perfectly cooked chicken that is often less greasy than if it were just simply deep fried.

Technically, a chicken broaster is more than just simply frying chicken in a pressure cooker. The device was invented by L.A.M. Phelan, an American entrepreneur who combined the two in 1953 and changed fried chicken history. To fully call your chicken broasted though, you must be using the machine, coatings, and marinades produced by the company.

In modern times, Americans are most associated with fried chicken because of popular restaurants like KFC and inventors like L.A.M. Phelan who made it easy for Americans to get fried chicken at virtually any restaurant.

However, we could hardly pretend to have invented the meal. Europeans have since the middle ages been frying chicken, more specifically, the Scots. They would use fat to deep fry their chicken and rarely used any seasoning, rather just plain old fried the chicken till the skin was nice and crispy.

At the close of the 18th century, Scottish settlers arrived in America. They mostly settled in the American south and around the Carolinas and Virginia. Luckily they also brought along their cuisine and cooking methods helping spread the glorious meal that is fried chicken.

However, even though they popularized the style of fried chicken, African slaves were likely the biggest influence on what we think of today as fried chicken. These enslaved Africans brought new methods and different seasonings from their former homeland as well as invented new processes here in America that ultimately made fried chicken what it is today.

Its Popularity Was A Result Of Slavery And Segregation

African slaves were sometimes allowed to keep a few chickens since they took up little space on the property and were mostly self sufficient. As such, like with innovations related to BBQ and preparing cuts of beef and hogs that the master's family rejected, slaves used their creativity and resourcefulness to create delicious food with the little they had available.

They would make use of pig's feet, collard greens, kale, or chitterlings and of course fried chicken too.

They would take the spices such as paprika that they had brought from Africa, bread them together with the chicken pieces, and leave it to the season for a while. After preparation, they would dip the meat in boiling palm oil. Even though they were only slaves, black women started selling fried chicken in the 1730s, bringing them some form of income.

We see a similar pattern continue following the civil war as well when despite racial issues and segregation, African-American cooks were prized for their culinary skills. While the origin of modern fried chicken in America may be something invented by African slaves in the southern states, virtually every southern grandma, regardless of race, has a prized family recipe for fried chicken that she will prepare for Sunday dinner!

Different Cultures Have Their Versions Of Fried Chicken

Even though America is the country most associated with the meal, there are many variations worldwide. The Senegalese coat theirs with peanut flour, while in Japan, they cut the small pieces and fry them like tempura. They name it karaage. Meanwhile, in Thailand, the chicken is prepared with a strong marinade and is typically served with rice. The Koreans have their method where the chicken is fried two times and then dipped in a spicy yet sweet sauce.

The important thing to consider here is that there is "Fried Chicken" and there is chicken that is fried.

KFC’s Success Was Linked To The Pressure Cooker

In America, Colonel Harland Sanders, founder of KFC, insisted that the chicken in his restaurant should be pan-fried when he opened his first restaurant. However, this method was troublesome as it took too long to cook. While it might work well for preparing at home, it didn't work well for frying up large numbers of chicken pieces for hungry customers. He went on to buy a commercial pressure cooker which he converted to a pressure fryer. The result was just as good as the pan-fried chicken, and it cut cooking time by half. This new development set the KFC's success while also moving fried chicken away from home and took it to restaurants.

Colonel Sanders was a retired tire salesman, who owned a gas station in Corbin, KY that also sold food. His dinery was so popular that he was even bestowed the title Colonel from the then Kentucky governor Ruby Laffoon for his contribution to the state.

In 1952, The Colonel began franchising the Kentucky Fried Chicken concept. Instead of running one restaurant, he went on the road to create a regional food style concept based on his style of fried chicken.

He franchised rights to Kentucky Fried Chicken's name and recipe for 5 cent royalties for each chicken they sold. The Colonel went on to don the white suit as part of his brand, and by the time he decided to sell his company in 1964, there were more than 600 different franchises. He sold his interest to a group of investors for $2 million dollars.

Today, KFC today is one of the world's biggest food brands and was ultimately acquired by PepsiCo in 1986 for $840 million. Today it has more than 24,000 locations world wide and is estimated to be worth more than $5 billion!

Fried Chicken Is An International Favorite

Just as KFC made its brand and flavor an international phenomenon, the favor was returned. The dish is so popular worldwide that fried chicken even has its own holiday: International Fried Chicken Day on July 6. It is not clear how this date came to be selected but it is now widely celebrated by fried chicken producers as a way to promote commerce. The fact that a dish like this has gained so much international popularity that it not only continues to circle the globe but inspire innovations as it is adapted by individual cultures is truly impressive.

Korea, Philippines and Guatemala all have food chains that sell unique fried chicken here in the United States. Each of these cultures has made it's own mark on the dish and then exported it to share with others. For instance, at Jolibee (Philippines) you can get get your fried chicken with a side of mushroom and gravy covered burger steaks, steamed rice, and palabok with mango hand pies for desert. Over at Bonchon however you can pair your Korean-style Fried Chicken with Korean tacos, pork buns, and shrimp shumai. If you want to experience it Latin style, Guatemala's Pollo Campero is serving up fried chicken with empanadas, corn salad, campero beans, yuca fries and some flan for desert.

No matter what your style, these are all delicious deserve to be celebrated along side core American favorite fried chicken chains like Churches, KFC, and Popeyes.

During the Christmas season, the Japanese get together as families for a Christmas meal. Unlike Thanksgiving turkey, the most significant difference is their main meal is Kentucky Fried Chicken. At around Christmas time, the KFC sales skyrocket as different outlets can sell at around five times the normal. Colonel Sanders's statue is usually found in every outlet in the country dressed in a red and white outfit to celebrate the occasion. Furthermore, according to Japan’s traditions, families should purchase a bucket of KFC during the Christmas celebrations.

Who's in the mood for some tasty fried chicken now? While the notion of who invented fried chicken seems a bit irrelevant now, I love studying the history of the dish. Things fried chicken are what makes America great. Sharing traditions, combining ideas, letting different cultures run with something in fun and unique ways and then sharing it with others as a celebration of culinary culture ... not something where one side claims it for themselves.

Things You Should Know About Living a Vegan Lifestyle