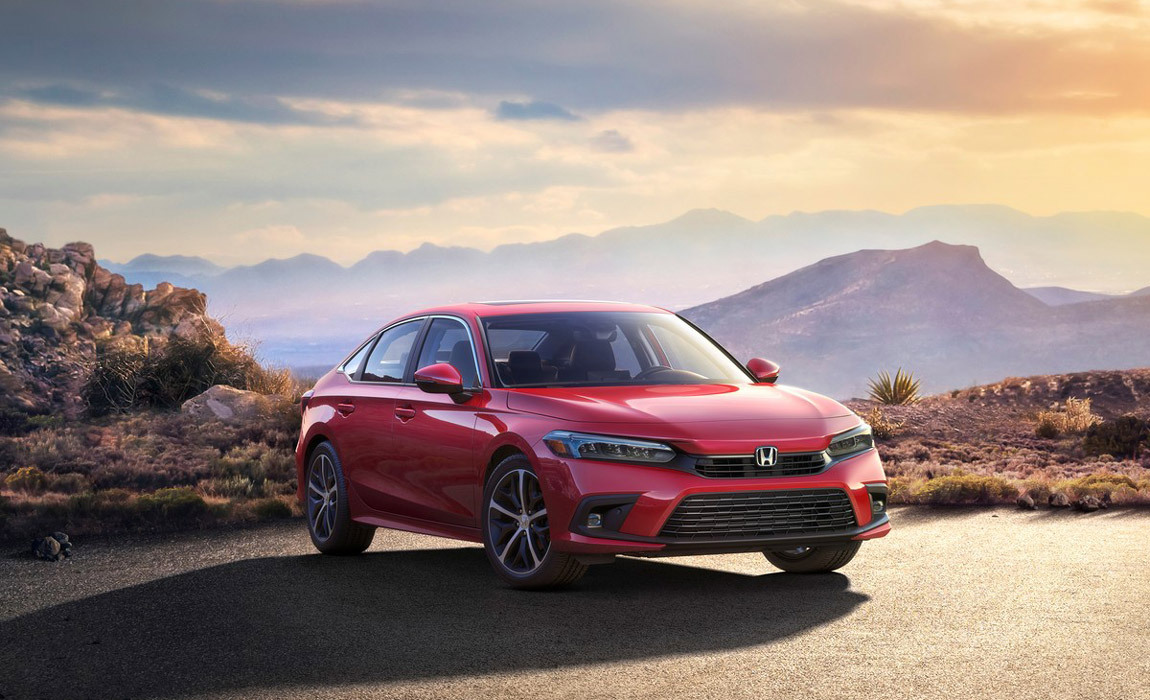 When Honda announced the arrival of the new Civic at the end of April 2021, petrolheads across the world let out a deep collective groan. It looked like the manufacturer was going to follow in the footsteps of its rivals and ditch manual transmission altogether, focusing exclusively on automatic transmission. That seems to not be the case though!

It turns out that Honda is adopting a different strategy. It knows that driving enthusiasts have a soft spot for manual gearboxes, so it’s segmenting its lineup. Its mass market cars will no longer have manual options, catering to changes in global consumer preferences. But it’s top-of-the-line Type R and Si models will.

The 2022 Civic sedan is a futuristic-looking vehicle that confirms that, yes, you really do live in the 2020s. Honda has redesigned the car from the ground up, completely changing how it looks from front to back. It’s still roughly sedan-shaped, but there are relatively few similarities to previous generations.

Whether the vehicle will become a classic remains to be seen. But, just to look at, it is reminiscent of some of the cars Volvo has been creating recently. Unlike Civics of the past, the brand has chosen a bold, heavy front end, giving the car an almost sporty feel.

Throughout the entire design process, Honda focused on keeping the car’s lines as “clean” as possible, allowing it to slip through the air. The basic model is not intended as a sports car but as a daily driver. However, you get the feeling that it could quite easily double as both. Honda certainly has the engineering prowess to make it happen, and, in that regard, it will likely be similar to the previous 10th-generation version.

As mentioned above, the basic models will not have manual transmission options. However, Honda’s media manager, Carl Pulley, confirmed that both the Si and Type R versions of the vehicle will.

Of course, for car enthusiasts, Honda’s decision to go down the manual route is good for future valuations. Manual 11th-gen Civics in good condition will be exceptionally rare in twenty years, and that could push up their resale value to tremendous heights.

The Return Of The Civic Hatchback

Furthermore, Honda indicates that we will likely see a return of the Civic Hatchback in the next year or so. The Japanese automaker says that it wants to broaden the line again and offer Civic customers more options. Not everyone who wants to own one of these vehicles also wants to drive a sedan. So the team at Honda are sensitive to this.

Interestingly, the hatchback version will include manual transmission, indicating how Honda is planning on segmenting the market. Adding the manual option will allow the company to keep the price in check, making the smaller Civic more attractive to young drivers and those who recently passed their test. The larger sedan is more targeting regular, middle age customers who are looking for something that requires as little effort as possible.

When the news first broke that the regular Civic sedan wouldn’t come with manual transmission, a lot of the brand’s fans felt let down. Alongside Honda Civic exhaust systems, the brand’s gearboxes are second to none. Many believe that the Japanese company makes the best transmissions in the world. So to see it abandon its market advantage was a little disappointing to say the least.

However, thanks to its high-end models, drivers don’t need to worry. Manual and automatic transmissions may become available within the same vehicle, allowing enthusiasts to effortlessly flick between the two driving modes.

For the street scene, it’s all good news. By including manual transmissions, it makes 0 to 60 runs more interesting. Instead of relying on a computer to do all the gear-changing, the responsibility is again the driver’s.

Honda also says that going faster doesn’t necessarily mean more fun. Sure, they could let computers decide on the optimal shift pattern. But drivers, it says, like to try out new things and pit their skills against each other. An all-automatic line-up would prevent that.

So how much is it going to set you back if you want to enjoy driving the new Honda Civic? Well, that depends heavily on the model you choose and where you live.

The basic model in LX trim will go on sale at $22,695. Interestingly, this price is only slightly higher than the current entry-level 10th generation Civic, at $22,245. Despite all of the disruption from the pandemic and global money printing, Honda has been able to make its flagship vehicle even more affordable.

The Civic Sport, the next model in the line, will sell for $24,095, which is just $50 more than the current starting price for the trim.

As you continue going up the scale, the vehicles become more expensive. Honda says that the Touring version will go for $29,295 which puts it on a par with the current model.

Unfortunately, Honda hasn’t yet confirmed the prices for its Type R and Si version of the vehicle, though we expect them to be significantly more expensive still. Please also note that the prices listed above are not official. Instead, they come from a leaked presentation given inside the company, detailing how much each of the models would cost.

So far, the pricing scheme seems to make sense. Honda knows that its brand is not as competitive as it once was and that the best way for it to compete is to come in at a lower price point. The company’s pricing strategy is a clear reflection of this. The brand does not seem to be taking into consideration the effects of inflation which have hit final prices from other automakers considerably. Thus, when you buy a Civic, not only do you still have the opinion of choosing a manual gearbox, but you’re also getting a great deal.